The Lifestyle Of Kings 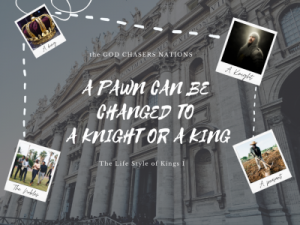 The Lifestyle Of Kings

The focus of kings

Starting From the beginning of time and up until this modern-day civilization, Kings have lived by a well-known character.

Kings are more concerned about territories, as it defines their strength and wealth. A Great king is known for the regions they have acquired. It shows the Kingdom’s wealth and most importantly the power and capability of their Supernatural Backing(The God they serve)[Joshua 2:9]

After conquering a Nation or a territory, they either Take captive of the residents and their livestock or hold siege of that land by setting their principles, and they set their religion in place and their laws. And Most importantly, they leave a Kingsman or a Noble in charge of that territory.

Kings live by tributes. An example is Solomon (1 Kings 10). The Nobles or the Kingsmen, alongside other district Nations, seeking allegiance of protection (A treaty) they send in returns of food supplies, Gold, and Other Valuable Resources to show their continual alignment to their agreement.

Let’s go back to the medieval Age of how a Kingdom operates. The system starts from The Kings – Lords(Nobles) – The Knights – The peasants. The peasants do the menial jobs, farming, paying taxes, paying for securities, and all of that. The Knights are the ones who know the principles of the land; they know the hidden secrets and pathways of the Kingdom; they are well trained to be knowledgeable in all things. Each one of them lyes the strength of 10 men joined together – Just like David mighty men (2 Samuel 23). They are the Kingdoms Asset – more like the pillars of that Kingdom. Now comes in the Nobles. They are usually the statesmen, the counselors, the lawmakers, and special advisers to the King.

But that’s not the Kingdom we are looking at today; it a Kingdom where God the Father is the King, His Nobles – the Elect, The Knight – The Ecclesias, and well, of course, the peasants – The canal men.

From the time man fell in Genesis up until the arrival of The perfect Man – Christ, man has lived in a state of darkness; he was brought down to the form of a peasant, toiling the ground, working for what he would eat.

You see young people today saying they are hustling, what are you hustling for actually? Psalms 127:2 – “It is useless for you to work so hard from morning until late at night, anxiously working for food to eat; for God gives rest to his loved ones.” And Christ has come so that we can find Rest (Matthew 11:28). So why are you still toiling?.

But take caution!- These Authorities aren’t meant for you to personalize for yourself. We own nothing here on Earth as long as you have been called to the Kingdom; you only manage that position like a Statesman. Matthew 13:53(NLT)

Anytime you go back to the old ways you live, you become a peasant, lose the authority you were given,

Today, I urge you to stand fast in your position when you give thanks and praises you offer God your Tribute. Make decrees like a King, remain loyal to the one who kept you in charge as a Statesman(Noble). Hold fast the principles and the Laws of Kingdom like a Knight. And never return to being a peasant.

A Pawn can be changed to a knight or A King.