HE GOT YOUR BACK 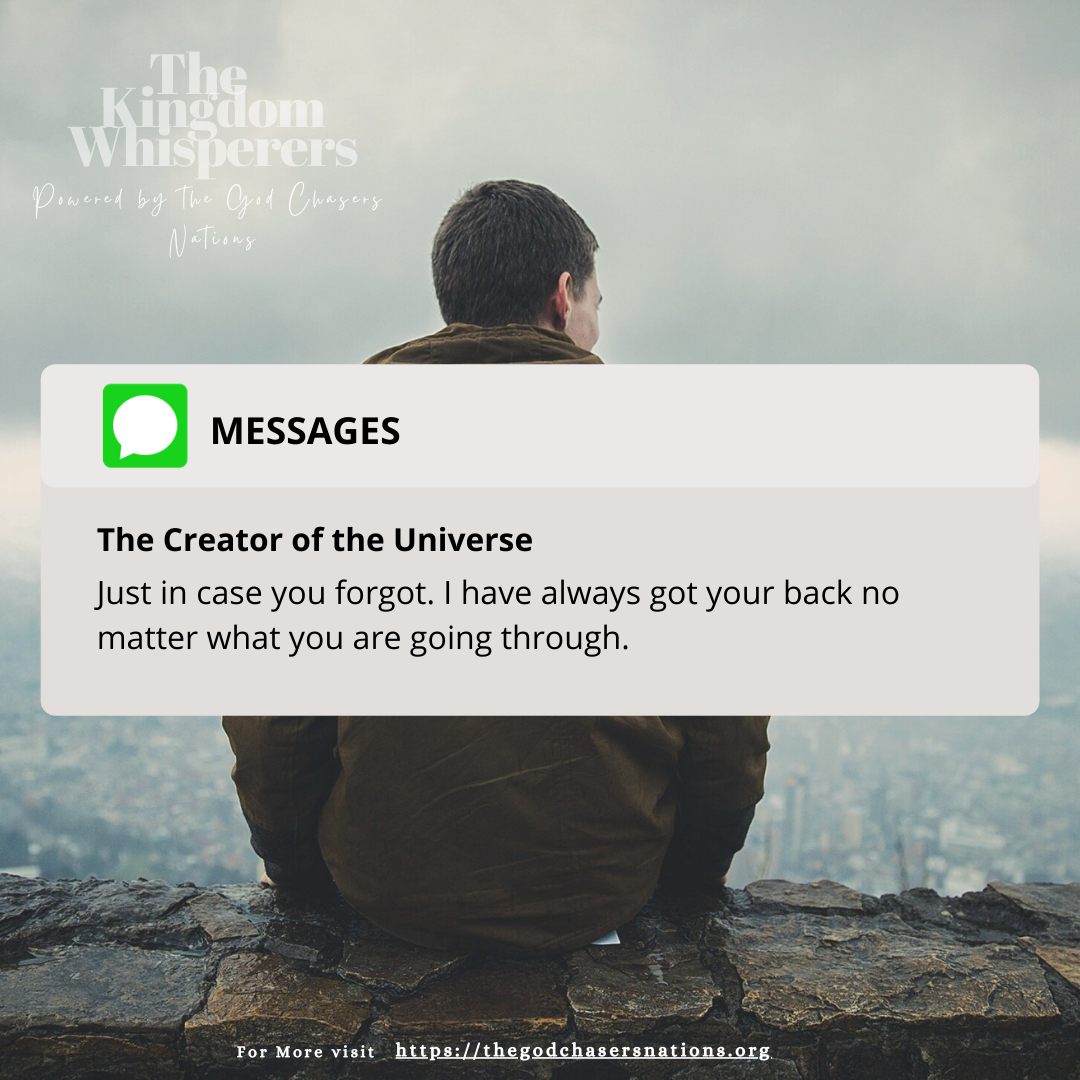 HE GOT YOUR BACK

So be strong and courageous! Do not be afraid and do not panic before them. For the Lord, your God will personally go ahead of you. He will neither fail you nor abandon you.” Deuteronomy 31:6 NLT

How great it is to know God got your back!

Everybody thought it was too late for Abraham and his wife, the One who created time showed up- He got their back.

She became pregnant, and she gave birth to a son for Abraham in his old age. This happened at just the time God had said it would. Genesis 21:2 NLT

Just when Moses thought it was all a mistake by the red sea, God got his back and did the impossible.

So as the sun began to rise, Moses raised his hand over the sea, and the water rushed back into its usual place. The Egyptians tried to escape, but the Lord swept them into the sea. Exodus 14:27 NLT

Laban cheated Jacob, yet God got his back, he flourished even in the midst.

Her rival vexed Hannah for she has no child even though she went to Shiloh year in year out. Finally, Hod opened her. The Father had her back; her tears were wiped away.

And the Lord blessed Hannah, and she conceived and gave birth to three sons and two daughters. Meanwhile, Samuel grew up in the presence of the Lord.

Naomi said, finally I returned worse than I left, but this God worked something out, her life was pleasant again. He got her back!

The enemies thought it was finished for Mordecai; I mean tomorrow you will be hung on gallows.  Books of record were remembered just because the Almighty got his back!

Hadassah lost her parents even at a tender age. Yes, Esther became the preferred for the highest seat any woman in that land could dream of because the Father of the Fatherless got her back!

Men said David was insignificant, but when the God that is significant showed up, the forgotten became the celebrity. He got his back!

Solomon was just a by-the-way son. I mean his stepbrothers would have once awhile reminded him the story of how he came to be. But the One Who qualifies the unqualified got his back, Solomon became the choice for the throne.

Jehoshaphat thought how I could fight against five kingdoms and win? The battle is over he thought The Omnipotent One got his back, he didn’t raise a finger to fight in the war.

It was twelve years already; the issue of blood was getting worse as she suffered and had spent all she had. Doctors have mentioned a series of bigger diagnoses and ran lots of investigations, in a moment, Jehovah Rapha, showed up and the twelve years of shame became a history.  The great Healer got her back!

The window of Zarephath said to her son let’s eat this last meal and wait for death, Jehovah Jireh got her back, the last meal became her beginning of plenty.

Bartimaeus by the meaning of his name was supposed to be an honourable man but was beaten, battered and chattered by circumstances. His only hope was to beg for he was blind. The creator and giver of sight showed up; his garment of shame was exchanged for the honour. He got his back!

A man who has no help whatsoever was beside the pool of Bethsaida for 38 years. He had thought that was how he would die. But no, the Helper of the Helpless showed up and said I got your back on this.

Time will fail me to talk about Jabesh, Ruth, Hezekiah, Gideon, Job, Daniel, Shadrach, Meshach and Abednego, the widow of Nain and many more.

I don’t know what you are passing through right now, but this God has a track record of standing by His people no matter what the situation might be. He got your back!

Cast ALL your cares on Him; He cares for you. He got your back on this dearly beloved. You just have to believe He does.

He is birthing a testimony through this situation; you can be sure of that. He is the same God.

You could whisper a word of trust to Him this moment because He sure got you on this. Yes, He does. Hallelujah 🙌🏽